The David T. Bailey Graduate School of Education was honored to host Marian Wright Edelman, Founder of the Children’s Defense Fund, as the Billie Grace Goodrich Distinguished Lecturer.  Edelman presented her lecture, “The State of America’s Children” at the Holiday Inn World’s Fair Site on October 10th, to a crowded ballroom. 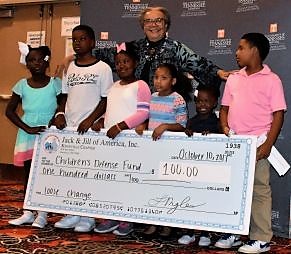 Attendance was open to the general public and also included alumni, Bailey Graduate School of Education and College of Education, Health, and Human Sciences students, faculty and staff, sisters from the Delta Sigma Theta Sorority and children from the Jack and Jill of America, Inc., Knoxville Chapter.  These children, working to earn the funds, presented Edelman with a $100 check for the Children’s Defense Fund which touched her heart.

Edelman’s lecture shared her lifelong mission to end child poverty and how we, as the future, can make the difference.  She has been an advocate for American’s facing economic and other challenges her entire professional life being inspired by Harriet Tubman and Sojourner Truth, whom she refers to as “her ladies;” two historical African American women activists whose images she wears on pendants. Encouraged by her parents, who made her always believe she could be anything, Edelman graduated from Spelman College and Yale Law School and became the first African American woman admitted to the Mississippi bar. To date, she has received over 100 honorary degrees and many awards, including the Presidential Medal of Freedom and the Robert F. Kennedy Lifetime Achievement Award.  She is currently working to ensure that children will continue to have health care available (CHIP-Children’s Health Insurance Program), continually encourages teachers and parents to work together to change the odds for children, and for our nation to invest in prevention instead of spending funds to care for these children after it is too late.

Photos from the event can be enjoyed here.

Marian Wright Edelman, founder and president of the Children’s Defense Fund, will speak at 6 p.m. Tuesday, October 10, as part of the Billie Grace Goodrich Distinguished Lecture Series in UT’s College of Education, Health, and Human Sciences.

Edelman founded the Children’s Defense Fund in 1973. The organization has been headquartered on the Alex Haley Farm in Clinton, Tennessee, since 1994.

Edelman has been an advocate for Americans facing economic and other challenges for her entire professional life. A graduate of Spelman College and Yale Law School, she was the first African American woman admitted to the Mississippi bar. She also directed the NAACP Legal Defense and Educational Fund office in Jackson, Mississippi.

In 1968, she moved to Washington, DC, to become counsel for the Poor People’s Campaign, an initiative started by Martin Luther King Jr. She then served as director of the Center for Law and Education at Harvard University.

Edelman serves on the board of directors for the Robin Hood Foundation and the Association to Benefit Children. She is also a member of the Council on Foreign Relations, the American Philosophical Society, the American Academy of Arts and Sciences, and the Institute of Medicine of the National Academies.

She has received more than 100 honorary degrees and many awards, including the Presidential Medal of Freedom and the Robert F. Kennedy Lifetime Achievement Award.

In 2015, UT awarded Edelman an honorary Doctor of Humane Letters degree when she delivered a commencement address for the College of Communication and Information.

Thank You to Our Sponsors: